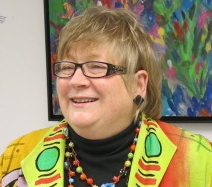 My artwork has been described as energetic, heartfelt,  joyful, stimulating, eclectic,  thought-provoking yet approachable.

I grew up in California and lived in Ohio and New York before my husband and I settled in Maryland outside Washington, DC. We have two grown children–a daughter and a son. I have a B.A. in Liberal Arts (specializations in Mathematics and German) and a M.S. in Mathematics.

Before I began my artistic work, I worked in the computer industry; my last industry role was running a successful consulting business as a vice president for a major computer firm. Always a painting enthusiast, I have been a full-time painter since 2003.  Then, I found myself without a role following a re-organization.  Instead of immediately seeking another position, I decided to take a break and pursue my interests in painting, gardening, and travel while I considered next steps.

At class one day my painting instructor said we would not be meeting the next week because she would be going on a painting trip to Sicily.  Wow–travel and painting both! Also, by that time I had found that painting florals and landscapes played into my interests in gardens, plants, and flowers. It was clear that painting, a very challenging and enjoyable effort, could provide a long-term umbrella for my interests as well as provide a foundation for a “second career.”  I have never looked back.

Initially I focused on building my artistic skills in various media, did personal study and took classes from many instructors locally and at national and international workshops.  I participated in group shows to gauge viewer reaction to my work.  I had a key goal, have a solo show within 3 years, which I was able to do.  Those early years were successful and I began using the Hirsh Studio name for my artwork and website.

My travels have taken me to all seven continents, often painting on location, and when not painting, taking lots of photos for use later as reference materials.

I am also a Master Gardener and an occasional speaker to garden groups on art concepts and garden design.

My work continues to win awards.  It is collected in the US and internationally.  I have been featured in juried shows at the Strathmore, Penn Street Gallery, Brookside Gardens (including a 3-person “feature” exhibit and a solo show), Yellow Barn Gallery, Glen Echo Gala Show, and many other venues.

In 2013 I was selected as a Resident Artist at the Capital Arts Network (later called Washington ArtWorks) and took the step of taking a studio with an artist friend. In August 2015, I moved to a larger solo studio/gallery as a Resident Artist and Teacher at Artists & Makers Studios, and began offering classes and workshops.

In addition, I am a member and participant in local art organizations.  I managed the Montgomery Art Association (MAA) Gallery store in the Westfield Wheaton shopping mall from 2010 to September 2016 when it closed after it lost its location.  I was also MAA’s president 2010-2013.

In September 2016 I was asked to judge the 2016 MAA Kensington “Paint the Town” Labor Day Invitational Competition.

Put simply, I paint because I find painting fun, rewarding, and challenging.

I work in multiple media—watercolor, oil, acrylic, gouache, and mixed media—depending on the subject and the visual impact I want.

I paint on location plein air, paint subjects like florals and still lifes in the studio, and sometimes use photographs for inspiration and subject matter reference. My abstract work is solely from my imagination.

Sometimes painting can seem magical as the picture seems to paint itself, capturing what I’ve imagined directly and simply.  Other times, it can be a real struggle, whether it’s because of the subject, a new technique, or simply being outside fighting weather and insects.

My style varies depending upon the medium I’m using and what I am painting.  A subject can appear very different done in varying media, and I intentionally exploit the capabilities of a particular medium to achieve my desired results.  What is consistent across my work, however, is my use of color, shape, and lights/darks to craft my images.

Regardless of content, the challenge of painting is to create a satisfying visual experience that captures viewer interest and emotion. It requires empathy and perseverance as well as multi-dimensional skills in technique, design, color sense,  problem-solving, and decision-making. It’s not easy, and as many say, is a journey of a life-time.

I find painting a joy and I invite viewers of my artwork to enjoy my journey with me. 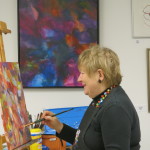 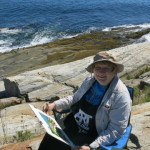